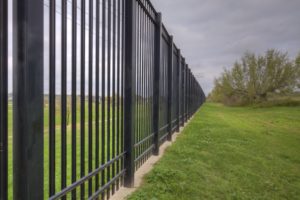 Dr. Adriana Martinez is a fluvial geomorphologist whose research focuses on human impacts on river systems using field work and Geographic Information Systems (GIS).  She is currently investigating the social and environmental impacts of the U.S. Mexico Border fence, including its effect on border communities and flooding. Approximately 5 km of fence was built between her home community of Eagle Pass, Texas and their sister city, Piedras Negras, Coahuila, along the Rio Grande.  Many residents view the fence negatively, and the fence may exacerbate flooding in the area by blocking floods from receding back to the Rio Grande after the river overtops its banks. 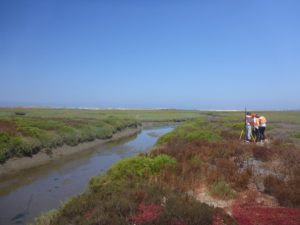 Adriana’s previous work in Texas and Utah examined how dams change sediment regimes and channel form of river systems.  Her research along the Provo River in Utah focuses on the influence of Jordanelle Dam on channel features and vegetation distribution. During her Ph.D. at the University of Oregon she studied the interaction between riparian vegetation and stream channels. Riparian vegetation influences river systems, through the interruption and channeling of flow, and is influenced by rivers, through the timing and regularity of inundation and nutrient fluxes. Biogeomorphology, is helping researchers better understand river systems and ultimately, helping us more efficiently and effectively restore rivers that have been significantly altered by human practices.  She is currently conducting work on the Tijuana River Estuary south of San Diego, California where she is examining the influence of sea level rise, increased sedimentation within the estuary, and sediment deposition within plants to determine how habitat might be changing for endangered species within the estuary.  In addition, Dr. Martinez has begun incorporating sUAS (drone) methods within her work to develop 3D topographical surfaces and examine landscape and depositional change over time. 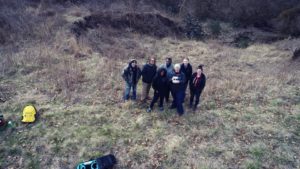 Conducting a drone flight with a graduate class to determine changes in the landslide (behind group) on the SIUE campus.

Adriana is an Assistant Professor at Southern Illinois University Edwardsville with a joint appointment in Geography and Environmental Sciences. Read more about her work on her website.