Dr. Beth A. Johnson is a professor of Geology at the University of Wisconsin-Fox Valley in Menasha, WI. She is a Quaternary Geologist interested in the glacial history and landforms of the Upper Midwest. She earned her Ph.D. at Northern Illinois University. Her doctoral dissertation was about the extent of slackwater sediments in the Savanna Terrace of the Mississippi River, attempting to trace them back to their source areas around Lake Superior and the Des Moines glacial lobe. She also has a Master’s Degree in Earth Science Education, which she finds to be a handy thing when working at a teaching emphasis institution. Most importantly, Beth recognizes that one doesn’t have to have a big lab and lots of grant money to do research. The skills and tools she picked up while pursuing her advanced degrees allow her to investigate many topics in geology that interest her, such as the history of Lake Agassiz researchers and the public’s perceptions of women geoscientists.

To say that Beth is a professor of geology at her campus is not quite accurate. In reality, she is the professor of geology – the only one there. Beth teaches at the University of Wisconsin-Fox Valley, a two-year campus in the University of Wisconsin System. This means the majority of her students are freshmen and sophomores who are taking introductory classes in preparation for an Associate’s Degree or to transfer to a four-year school to work on a Bachelor’s Degree. It can be a very isolating experience to be the only geologist in a college – not many students are interested in majoring in the science and none of the staff have the same understanding and appreciation of geology that she does. However, it does give her a better appreciation for her membership and participation in professional societies and support networks such as the Geological Society of America, the National Association for Geoscience Teachers, the Association for Women Geoscientists, and the Earth Science Women’s Network. 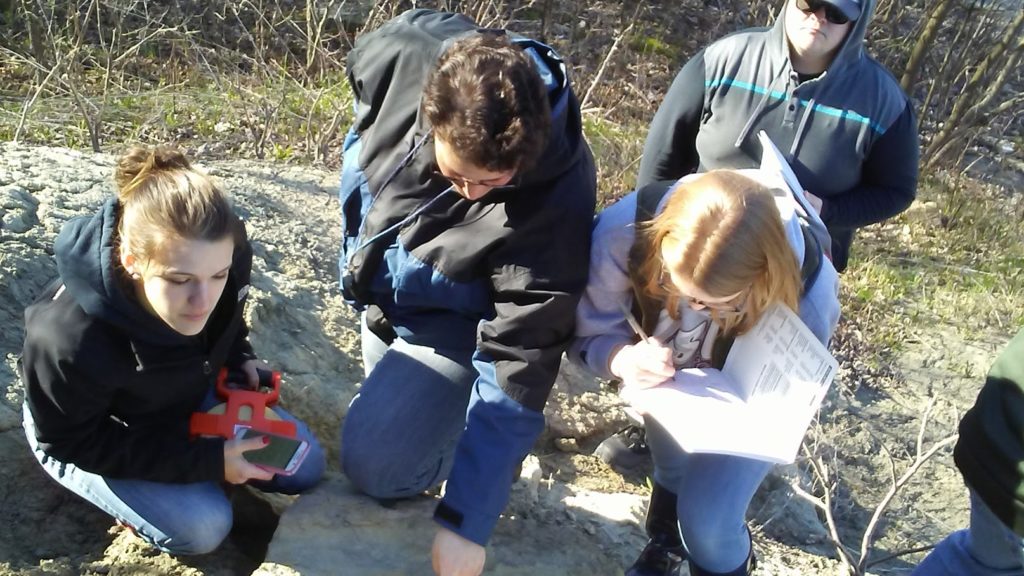 One other thing that makes Beth a bit different is that her background is more like that of her first-generation college students than they realize. Beth is the first member of her family to earn a college degree, which she did with an Associate’s Degree from a community college in Illinois. While there, she struggled to find scholarships and opportunities in research that would consider a student from a two-year school. She now works to make sure her two-year campus students have more of the opportunities she was denied at their age, including working with the Wisconsin Space Grant Consortium to create a scholarship fund specifically for students attending two-year colleges. To her, students should never be passed over for an opportunity they qualify for just because they attend a smaller school.

Beth’s most recent “Hmm…That’s funny…” moment came in 2015 when she was reading Headstrong: 52 Women Who Changed Science and Changed the World by Rachel Swaby. In reading it, she realized that although the women included in the book were extraordinary scientists, that the book failed to include (or correctly describe) many amazing geoscientists. She decided to do something about it. Her recent work has focused on examining how women are presented to the public as geoscientists in both movies as well as children’s books, knowing that this was the sole exposure that many people have to geoscience and the people who do it. As a result of several GSA sessions dedicated to Women and Geology, and the hard work of Beth and many of her colleagues, she edited the GSA Memoir 214 Women and Geology: Who Are We, Where Have We Come From, and Where Are We Going? published in 2018.

Taking a broader view, Beth understands that if more people are to get interested in geoscience, then they need more access to it. She leads geology walks, gives presentations for a number of community clubs, works with scouting groups to help them earn science merit badges, volunteers with community geology clubs, and performs teaching and science demonstrations for various public schools and STEM advocacy workshops. She has partnered with the Weis Earth Science Museum of Menasha, WI on several occasions to extend these activities to a wider audience and most recently has been working to create educational brochures on the geology of various Wisconsin State Parks. Although she would be thrilled if these activities resulted in more students taking geology classes, she knows the value of getting taxpayers and voters interested in supporting science and protecting public lands. Because of her efforts to increase access to geoscience education, Beth was awarded two Arthur M. Kaplan awards by UW-Fox Valley. 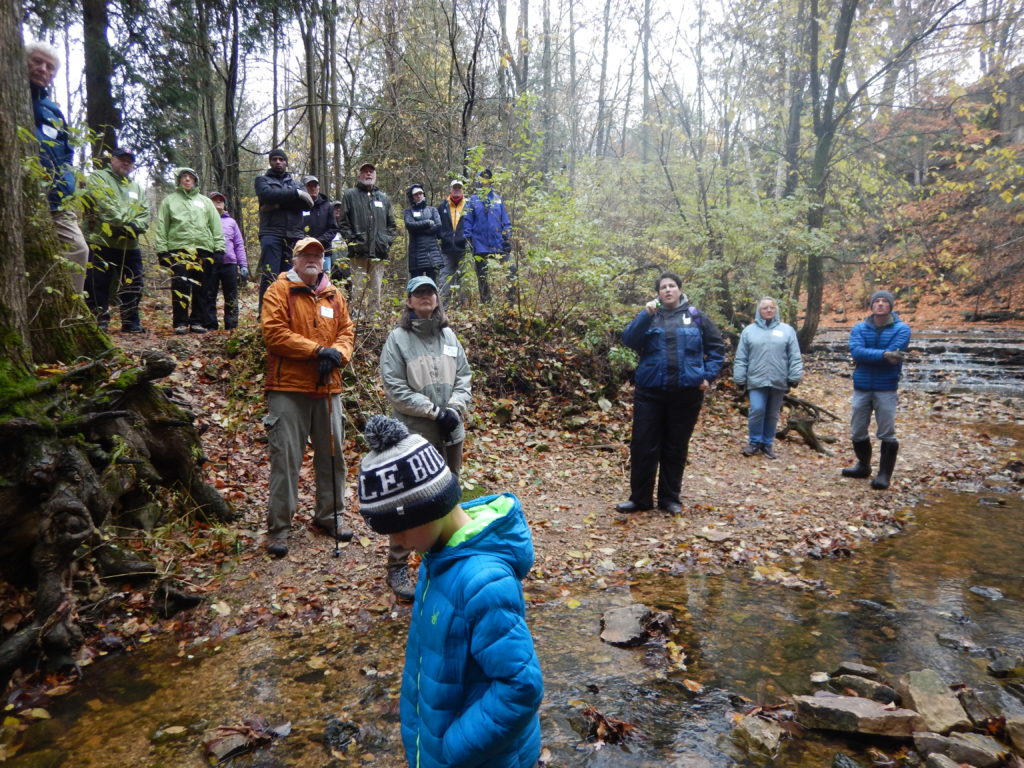 Beth Johnson (in blue and black) leading a nature walk for members of the Northeast Wisconsin Land Conservancy Group, looking up at a stone arch at Fonferek’s Glen County Park near Ledgeview, WI.