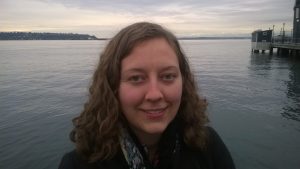 Dr. Britta Voss is an aquatic biogeochemist whose research focuses on chemical and biological transformation of carbon in river systems. Her interest in the interactions of water, rocks, and life began during her undergraduate studies in chemical oceanography, where she had the opportunity to participate in research cruises from coastal zones of the Pacific Northwest to the open waters of the North Atlantic and Pacific Oceans. Her graduate and postdoctoral research brought her on land to study chemical weathering and biological impacts on carbon transport in river systems. Now, she is stepping outside the lab to apply her scientific training to societal challenges through the AAAS Science and Technology Policy Fellowship at the National Institute of Standards and Technology.

Britta’s interest in Earth science has always been motivated by a curiosity about the natural and anthropogenic processes that drive environmental systems and a desire to share that curiosity with the public. As an undergraduate at the University of Washington, two formative experiences inspired her to pursue science communication as a key component of her academic training. First, she took a science writing course, which introduced her to the potential for communicating important scientific information, like the public health tradeoffs of flame retardant chemicals, to broader audiences. Second, she volunteered for the National Ocean Science Bowl competition, in which teams of local high schoolers battle over their knowledge of marine science. Her commitment to science communication was solidified by seeing these exposing young students to a field they might not otherwise consider as a potential career and bringing university researchers into contact with members of the community. She has participated in regional ocean science bowls every year since. 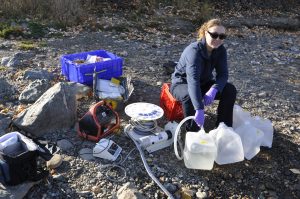 suspended sediment sampling from the Fraser River collected during a field trip with colleagues from WHOI (photo credit: Chris Linder)

Britta spent her graduate years in the Massachusetts Institute of Technology/Woods Hole Oceanographic Institution Joint Program in Oceanography traveling across British Columbia, Canada, for her thesis research on the Fraser River. The Fraser River study is part of an ongoing project studying biogeochemical dynamics of large rivers around the world called the Global Rivers of Observatory. During her field trips, she blogged about the scientific and personal aspects of collecting water and sediment samples and working with local colleagues and their student volunteers. Through her involvement with the student climate activism group Fossil Free MIT, she practiced communicating the societal implications of science outside her own field, and developed a stronger interest in applying her technical knowledge to increasing public awareness of critical issues like climate change.

As a Mendenhall Postdoctoral Fellow at the U.S. Geological Survey, Britta brought her research on biogeochemical impacts on river carbon transport to the upper Mississippi River basin. Her interest in science communication and policy led her to supplement her research with a course on Colorado water law and policy and a science communication internship with the Association for the Sciences of Limnology and Oceanography (ASLO). Now working in Washington D.C., she is excited to participate in a day of visits to Congressional offices to discuss environmental policy issues with elected officials later this month. 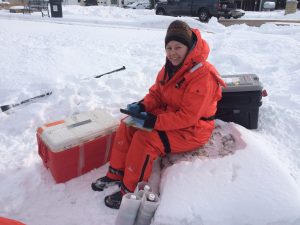 Starting in graduate school, Britta has appreciated the inspiration and professional guidance of the ESWN community. She believes the open dialogue and mutual support offered by the group’s social media platforms and the resources provided by the organization for early career scientists are an invaluable tool for improving the status of women in the Earth sciences. The ESWN community has played a critical role in disseminating awareness and sharing strategies for responding to scientific misconduct, which have attracted increasing public attention in recent years. It is this existing community that has supported the recent efforts of scientific societies to help their members try to begin changing cultures that have historically been hostile to women’s success in science. Britta was excited to participate in this process by helping ASLO engage its membership in discussing sexual misconduct in field research and update its code of conduct to address sexual misconduct more explicitly. She is hopeful that through the ongoing efforts of ESWN members, the Earth science community will accelerate its progress on improving gender equity for scientists.