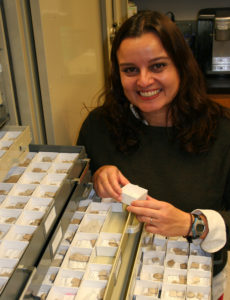 Dr. Dena Smith’s research program has focused on understanding the evolutionary and ecological history of insects.  She uses the fossil record to study processes of fossilization, insect response to climate change, the co-evolutionary relationships between insects and plants and shifts in insect biodiversity patterns through geologic time. This work has allowed her to work at very different spatial and temporal scales, at times conducting research at some of most spectacular fossil localities in the world.  She also conducts fieldwork in modern systems, from playa-lake settings in the southwest deserts to tropical forests in Costa Rica and does experimental work with modern insects in the lab.  What she’s learned thus far is that insects are an amazing group of organisms, with an excellent fossil record and an interesting evolutionary history.  For example, beetles have had very low rates of extinction relative to other organisms and this likely contributes to their great modern diversity. Dena also has found evidence of insect groups that have specialized on eating the same group of host plants for millions of years. In collaborative work digitizing museum collections, she has found that many fossil insect specimens have yet to be studied, meaning that there are many lifetimes of discoveries yet to be made. 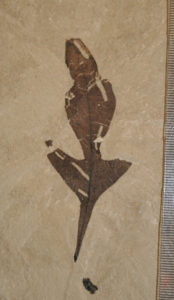 The leaf is a 45 million year old Cardiospermum leaf with insect feeding damage from the Green River Formation in Colorado (uncatalogued, in CU Museum).

Dena was the Curator of Invertebrate Paleontology at the University of Colorado Museum of Natural History for sixteen years, where she also served as a faculty member in the Department of Geological Sciences. While there, she had the opportunity to lead several large collaborative projects that brought together diverse teams of scientists from many discipline areas, informal and formal science educators and teams of programmers and social media specialists to improve inclusivity in the sciences, democratize data accessibility and start tackling the big challenges in deep-time science.  It was these exciting and innovative environments that led Dena to the National Science Foundation, where she works today as a program director for the Sedimentary Geology and Paleobiology program in the Division of Earth Sciences. 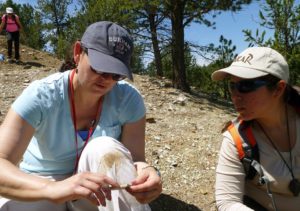 Dena looking at fossils at Florissant Fossil Beds, NM with a researcher from Peru.

Dena is a Chicana scientist who has worked her entire career to ensure that our scientific workforce is diverse, inclusive and equitable.  She believes that universities, museums and professional societies are in a unique position to serve as change-makers and should serve as leaders in the effort to broaden participation of underrepresented groups in the sciences.  However, only a few have risen to the occasion and she certainly found her time as an academic to be both isolating and frustrating.  Learning about the Earth Science Women’s Network as she was making the transition out of academia was extremely important.  “I suddenly found a whole new network of amazing women and didn’t feel quite so isolated in my journey anymore. Learning about other women’s stories and hearing that they had similar experiences was incredibly empowering for me and helped me jump into a whole new career path”. Dena has found that working with the National Science Foundation and participating in the ESWN, the Society for the Advancement of Chicanos and Native Americans in the Sciences (SACNAS) and the Paleontological Society provides exciting opportunities to make real change and work closely with the diverse and vibrant science community of the future.