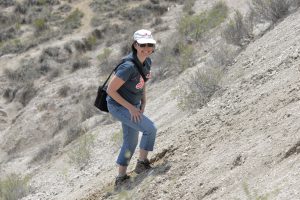 Svetlana is interested in guiding Mars rover exploration strategies. She studies the habitability of sites explored on Mars and Mars analogs on Earth, as well as site-specific biosignature preservation potential. Her work involves using combinations of Mars rover-like data sets and high-resolution lab techniques to analyze field-collected Mars analog samples. She has analyzed samples from evaporite-rich playa sediments to arctic concretion-rich sandstones. She has recently begun characterizing carbon reservoirs in the best (and only) samples available for study on Earth from Mars itself: Martian meteorites.

Currently, as a Postdoctoral Fellow at Carnegie Institution of Washington, Svetlana is using variety of laser Raman and fluorescence spectroscopy techniques, including time-resolved and deep UV Raman, and confocal Raman imaging spectroscopy to detect biosignatures of meteorites and earth analogs for Mars. Some of these systems may provide useful support to the first-time data sets to be collected with two upcoming Mars missions, both set for launch in 2020: NASA’s Mars 2020 rover and European Space Agency’s ExoMars rover. She is fortunate to collaborate with two NASA Mars rover teams, the current Curiosity rover (Mars Science Laboratory) and the upcoming Mars 2020 rover. 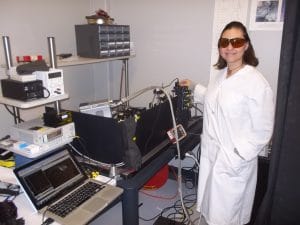 These collaborations have given her unique insights into aspects of Mars rover science operations, decision-making about sampling target priorities and analyses, and interpreting returned rover data in a team setting.

In addition to doing science, Svetlana is passionate about using astrobiology as a tool to inspire the next generation of scientifically literate leaders. This is why she earned a Master of Arts in Mass Communication with a specialization in science communication before getting her PhD. This is also why at ASU, as a NASA Arizona Space Grant Fellow, she developed a next-generation science lessons for 6-12th grade educators, centered around the narrative, “Are we alone?” This project aimed to supplement classroom science learning using 21st century tools, which may boost the confidence of science teachers, improve the attitudes towards science of students, and increase the range of students exposed to NASA topics. She also enjoys being on the executive director team of an online global collective of astrobiology enthusiasts and students, SAGANet.org. Through this work, she aims to improve student and public engagement in science through the narrative of astrobiology. 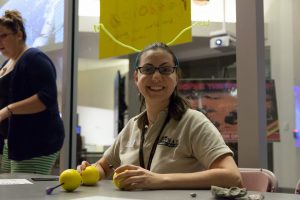 Svetlana at Night of the Open Door’s Astrobiology booth at ASU, engaging the public in science through topics like the search for life.

Svetlana has appeared at many different events to promote STEM, careers in science, and her Mars research. While at ASU, she was a regular participant in Night of the Open Door, where students and lab groups set up activities and demos for a public open house. In the Phoenix community, she appeared in panel discussions on both science and STEM careers, including at Phoenix ComiCon, Astrobiology Science Conference’s “Are We Alone” panel, the Girls Rule Foundation’s mother-daughter summit, and even in various middle school classrooms. She was recently featured in a trading card game about scientists that was developed by one of the local schools with which she worked. She was honored to be featured on an episode of a children’s show about science careers, STEM Journals, on Cox channel 7.

Svetlana is committed to improving the representation, retention, and satisfaction of women in STEM fields. This was partly inspired by her participation in the Women in Planetary Science (WIPS) group at ASU. Svetlana has enjoyed being member of similar national science associations for women, such as the Earth Science Women’s Network. These groups have been a useful source of information about science career topics that are rarely taught in the classroom or the lab yet crucial to success as a scientist, including work-life balance, harassment, and having children in academia. Svetlana hopes to give back the valuable tips she has learned in these groups to the next generation of women in science. To this end, Svetlana is the primary supervisor for a pre-doctoral female intern who is also a McNair Schol 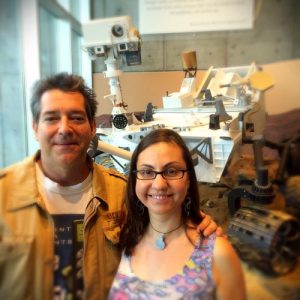 Svetlana with STEM Journals TV show host, Goeff Notkin, after filming the Paleontology episode about her Mars research. In the background is a true-size mockup of the Curiosity rover, which also made an appearance on the episode.

ar. The McNair program provides activities to prepare students for doctoral study and is designed to address the lack of representation of disadvantaged groups in higher education. As a role model who is close to her intern’s age, Svetlana hopes to empower her to have a fulfilling and balanced career in science.

When Svetlana is not thinking about life on Mars or exciting the public about it, she enjoys dancing and performing science experiments in a different kind of laboratory: edible experiments in her kitchen!