Steps to Building a No-Tolerance Culture for Sexual Harassment

The American Geophysical Union can lead the way in building an environment where sexual and other types of harassment have no place. 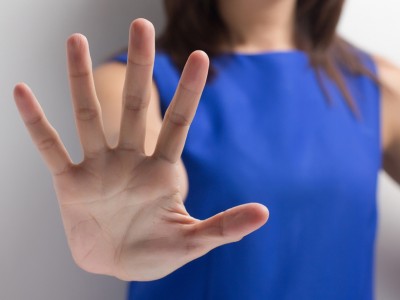 In the past 2 weeks, two new egregious cases of professors sexually harassing students—and getting away with it for years—have hit the news, following a high-profile case that became public in October 2015. In that first case, a professor sexually harassed students for decades at two institutions, whose administrators turned a blind eye to student complaints. In another, recently brought to light on the floor of the U.S. House of Representatives, a professor sexually denigrated his students. In the third, a young professor fired a graduate student after she did not reciprocate his sexual advances. These cases have raised broad public awareness about a permissive culture of harassment and bullying.

We all know similar horrible stories, be it from personal experience or from our friends and colleagues. Sexual harassment is a problem in science, yet it is not just a science problem. It happens in every discipline, on the street, in industry, and ingovernment.

Harassment endangers the personal, professional, physical, and emotional well-being of individuals and their communities. It can exploit differences in religion, race, class, ability, sexual orientation, and gender identity and is especially toxic when perpetrated by people in positions of power. All these forms of discrimination have no place in our community.

We believe that as the largest scientific society representing the Earth and space sciences, with 60,000 members, the American Geophysical Union (AGU) has a responsibility to take a leadership role in creating a zero-tolerance culture for harassment in our community.

AGU has a responsibility to take a leadership role in creating a zero-tolerance culture for harassment in our community.

The Scope of Sexual Harassment

Harassment can have especially injurious effects in disciplines with low diversity, such as the geosciences. Anyone can experience sexual harassment, although women and transgendered people are the most common targets.

Women made up 39% of U.S. bachelor’s degrees in the Earth, atmospheric, and ocean sciences in 2011 [National Center for Science and Engineering Statistics, 2015] but only 20% of faculty in these fields [Glass, 2015]. Of these, Black, Hispanic, American Indian, Alaska Native, and Asian Pacific Islander women represented only 5% and 7% of bachelor’s degrees and tenure-track faculty, respectively (as reported by National Center for Science and Engineering Statistics [2015]). These low numbers can lead to feelings of isolation, professional insecurity, and increased vulnerability [Holmes et al., 2015].

In a 2010 member survey by the Earth Science Women’s Network (ESWN), 51% of almost 500 female respondents indicated that they had experienced sexual harassment sometime during their career [Archie and Laursen, 2013]. The survey did not explore what proportion pursued formal complaints, but other datasuggest that very few incidents generally are reported. This can be due to targets not knowing where to turn for help [Clancy et al.,2014], active discouragement by superiors, and fear of repercussions.

In a 2010 member survey by the Earth Science Women’s Network (ESWN), 51% of almost 500 female respondents indicated that they had experienced sexual harassment sometime during their career.

Another reason given for why many incidents go unreported is a lack of confidence that reporting will lead to a satisfactory outcome and remove the problem. The failure of academic institutions to protect their students and employees is highlighted by an open U.S. federal investigation into the mishandling of more than 250 sexual assault cases in 161 universities.

Outside the university boundaries, students are vulnerable in disciplines with research-related travel away from home. In a 2014 survey of field archaeologists [Clancy et al., 2014], 71% of women respondents and 41% of men reported receiving inappropriate comments, and 26% of women and 6% of men reported experiencing sexual assault while conducting field research. Female trainees disproportionately reported unwanted sexual attention coming from their superiors. Similar data for the geosciences do not exist and need to be addressed, as the enrollment of students in geoscience field camps continues to increase, reaching almost 3000 in 2013 [American Geosciences Institute, 2013].

The three recent sexual harassment cases to hit the news further show a lack of commitment from institutions to take the problem of harassment seriously. When the violators are professors, they suffer few, if any, disciplinary actions with real professional consequences, especially when they are renowned in their field and well funded. If there is an outcome to a report of harassment, victims may see their violators “punished” with sabbatical-like leaves (with relief from teaching and service but no curtailment of their research), career advancement at another university, or early retirement with full benefits.

This normalization of unethical—and illegal—behavior is driven by the prioritization of research funding and prestige. The practice is dangerous: Harassment contributes to the chilly climate experienced by underrepresented groups and factors into their decisions to leave science and academia. The brain drain caused by the reckless behavior of a select few, which is enabled by their peers, threatens individual careers and harms the collective, hindering scientific progress.

In response to the recent sexual harassment cases, U.S. Rep. Jackie Speier (D-Calif.) recently addressed the U.S. Congress with plans to put forth legislation that would require universities to inform others of disciplinary proceedings regarding violations of Title IX, which protects people from discrimination based on sex in education programs that receive U.S. federal financial assistance.

An Opportunity for Scientific Societies to Show Leadership 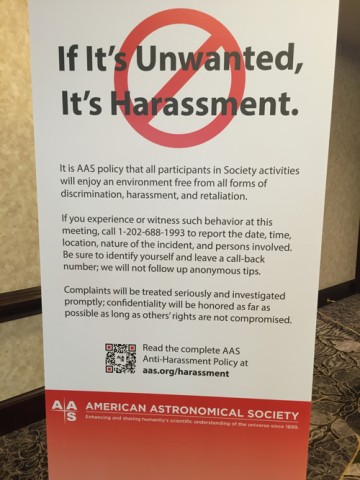 Where research institutions are failing, scientific societies have an opportunity—if not an obligation—to lead the way in transforming the culture of science into one that does not tolerate harassment.

This is especially important because harassment also occurs at meetings run by professional societies. For example, astronomers have created a grassroots network of allies on call to escort people from American Astronomical Society conference events safely, to protect attendees from other conferencegoers. This extraordinary model is being emulated by other scientific groups in response to harassment in their communities. That such networks need to exist is appalling.

Scientific societies should support these member-driven efforts and other initiatives to protect current and future generations of scientists from harassment. They should also use their positions of privilege to send a clear message that harassment will not be tolerated.

What Specifically Can AGU Do?

Facilitate public conversations about the problem. At the 2015 Fall Meeting, AGU leadership in collaboration with the Association for Women Geoscientists (AWG) and ESWN hosted a town hall session on the role of societies in responding to the problem of harassment. Theinvited speakers were Meg Urry, professor of physics and astronomy at Yale University and president of the American Astronomical Society; Christine Williams, professor of sociology at the University of Texas at Austin and an expert on gender, race, class inequality, and harassment in the workplace; and Mary Anne Holmes, professor emerita of Earth and atmospheric sciences at the University of Nebraska–Lincoln and past program director of the U.S. National Science Foundation’s (NSF) Increasing the Participation and Advancement of Women in Academic Science and Engineering Careers (ADVANCE) program.

The participation of AGU Past President Carol Finn, President Margaret Leinen, and President-Elect Eric Davidson sent a strong message that AGU takes the safety of its members seriously. This was the first of what we hope will be many public discussions on the problem and engagement with members for feedback through other town halls, organized sessions, webinars, publications, and social media communications.

Codify a no-tolerance culture. Scientific societies have the responsibility to represent their members and the power to make a clear statement about what behaviors will not be tolerated. The American Astronomical Society has an antiharassment policy that defines sexual harassment as “unwelcome sexual advances, requests for sexual favors, and other verbal or physical conduct of a sexual nature.” Their policy outlines processes for reporting, investigating, disciplinary action, and appeals.

AGU is currently reviewing its code of ethics in consultation with other societies and community and organization leaders. This code should also include strong language protecting those who report and assist in investigations from retaliation, and it needs to be prominent on the AGU website and communicated to its members regularly.

Disciplinary actions could include the temporary or permanent loss of membership privileges and revocation of bestowed honors and awards.

Enforce the code of ethics. Scientific societies can lead where academic institutions are failing. AGU should investigate all reported cases of violations that involve their members, whether they occur at AGU-sanctioned events or not. Disciplinary actions could include the temporary or permanent loss of membership privileges, including participation at AGU-sponsored events, and revocation of bestowed honors and awards.The American Association for the Advancement of Science recently withdrew the nomination of a scientist for one of its awards once it was revealed that he had pending criminal felony charges. Sanctions with real professional consequences send a deterrent message to potential violators and a clear message of support to victims.

Furthermore, we hope that when societies that contribute to the recognition of academic scientists publicly acknowledge that serial harassers damage the integrity of science and are a menace to our community, funding agencies will follow suit and force academic institutions to change their culture.

In the past 2 weeks, NASA and NSF have released statements on their policies against harassment and other types of discrimination; this is an important first step to not allowing harassers or the institutions that protect them access to public grant funds.

Train personnel on best practices to respond to instances of harassment. TheAstronomy Allies and the EntoAllies, the latter a grassroots effort from the entomological community, are examples of groups that can be created to ensure the safety of members at scientific meetings. AWG, ESWN, and other organizations that serve underrepresented groups also provide peer support to vulnerable communities.

In addition to supporting these types of grassroots efforts, which rely mostly on volunteer work, and considering the creation of its own “allies” group, AGU should go further and facilitate the training of AGU personnel and community leaders for effective responses to harassment.

Harassment of any kind endangers the ability of science professionals to conduct their work. Given the lack of support from academic institutions, AGU should lead.

Conduct research on the extent of harassment in the geosciences. The prevalence of harassment in our fields is unknown because the harassed are intimidated into not speaking out for fear of retaliation. As the largest geoscience professional society, AGU can lead the commission of a research survey of its membership in collaboration with other U.S. and international societies to collect information on the work culture of geoscientists.

AGU leadership has made a public commitment to lead efforts to provide a safe and welcoming environment for all scientists. We commend AGU for striving to find better ways to achieve its core guiding principles, which include equality and inclusiveness, building a space for diverse backgrounds, fostering open exchange of ideas, nurturing the next generation of scientists, and pursuing excellence and integrity in its mission to promote discovery in Earth and space science for the benefit of humanity.

Combating sexual harassment and other types of discrimination based on sex, gender, race, class, and ability is well within AGU’s core guiding principles. We hope that AGU will approach changing the culture of our science with the same focus that underpins its other endeavors.

We thank the speakers at the town hall session “Forward Focused Ethics—What is the Role of Scientific Societies in Responding to Harassment and Other Workplace Climate Issues?” The opinions expressed in this article represent those of the authors and not those of their employers or of AGU.